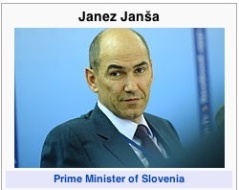 McGill University earlier this month, as he presented NAME – Readymade. In 2007, Janez Janša and two other Slovenian artists (Janez Janša and Janez Janša) changed their names to that of Slovenia’s then-current right-wing Prime Minister, Janez Janša.

Since then, the artist Janez Janšas have presented exhibits, published a set of essays, and made a film about their name changes, as well as continuing their art practices as solo artists. The politician Janez Janša has since been charged with plagiarizing Tony Blair(!), and via a non-confidence vote (in March 2013) was ousted from his second (non-consecutive) term as Slovenia’s Prime Minister. Besides this, in June 2013 he was charged with corruption. Note: None of the latter Janez Janša’s undoing seems directly related to the former Janez Janšas’ name changes.

The Janez Janšas’ act of simultaneously changing their names, especially when presented as the “NAME – Readymade” exhibit, book, and film begs an examination of what exactly is a personal name. For those unfamiliar, the Janez Janšas’ use of  “Readymade” refers to Marcel Duchamp’s practice of repositioning everyday items as art pieces. The most famous of these is his 1917 piece “Fountain” which features a urinal.  Through his readymade practice Duchamp asked, when is an item art and when is it just an everyday object?

The Janez Janšas extend this question to reposition a personal name: can a name change be considered art? It seems that yes, it can; at least in the case that a known name is simultaneously adopted by three artists, in a particular political climate. The Janez Janšas’ presentation of their group name change as art is quite convincing. Can we see more of this? In what other ways can names be the basic material of an art practice?

As I write my dissertation about name changes made by people who have migrated to Canada over the past forty years, I am often thinking about the personal and public politics that influence name changes and name reversions. Quite simply, all name changes are political. Whether changes to names are made as strategies for belonging, or as efforts toward maintaining or promoting a personal or cultural origin, they represent political choices. And many individuals’ choices are more

obviously based on broader national or global politics, particularly when deflecting prosecution, or defending perceptions of a culture: think of the Osamas who had to decide what to do about their names after 9/11. (The 2005 film by Mahmoud Kaabour and Tim Schwab, Being Osama, documents this dilemma).

To me, the political aspect of the Janez Janšas’ decision to change their names is playful heckling. The politician Janez Janša, not unlike Canada’s own Prime Minister, Stephen Harper, tightened public funding for the arts and limited the freedom of the press, amongst other challenges to democracy. That three well-known artists responded to these actions by simultaneously changing their names to match that of Janez Janša is a great political tactic. Suddenly, the spotlight that usually follows this politician is diluted and weakened by other well-known people sharing his name.

And as with Duchamp’s urinal, a name repositioned has its meaning interrogated. The resonance of a national leader’s name is diminished as it becomes just as insignificant or as ridiculous as any other object or word. The artist Janez Janšas have chosen a slowly unfolding, playful, legal route to demonstrate their dissent. To the public who is aware of this name change, it’s a wonderful joke to be let in on: at least a smirk ensues.

Sure, changing one’s name also comes at some cost to one’s identity and through time spent dealing in bureaucracy. But as a political art practice, it engages in an inventive, novel way: one that seems more apt than ever with our online social networks’ focus on names as part of online presences and personal brands.

So, what would happen if Robert Lepage changed his name to Stephen Harper?
And what if Kent Monkman and Margie Gillis did it, too?