Anticipating the upcoming Canadian Society for the Study of Names conference, I’ve been thinking about the names of public places. This is in part because one of the guest speakers is Reuben Rose-Redwood, a toponymic activist.

What does it mean to be a toponymic activist? Rose-Redwood’s bio and abstract are here, but in brief, he’s against selling the names of public buildings to philanthropists and corporations. I’m super curious to hear Rose-Redwood’s talk, and I’ll likely write a follow-up blog, but these are my current mullings/questions:

Over the past decade in Canada, a number of (re)christenings of buildings have taken place. This is a clear indication of our federal government’s trend toward privatization, but what does it mean for public places? These buildings are parts of our campuses, or our sport/concert complexes, but we’re now asked to think of and refer to these seemingly public spaces with a private label: the name of an individual or a company has become our referent.

Examples of these kinds of name-sales in Montreal include McGill’s Schulich School of Music, Concordia’s John Molson School of Business, and of course, the Bell Center. Looking West, Calgary’s Saddledome has had four prefixes since it was built (Olympic, Canadian Airlines, Pengrowth, Scotiabank), but it does remain distinctively Calgarian as “the Saddledome.”

During this same decade, the amount graffiti in Montreal –and perhaps in most places?– has increased. Montreal can boast some very impressive street art, but tags are more my focus here. Wikipedia’s extensive glossary of graffiti defines “tag” in this way:

tag (scribble): A stylized signature, normally done in one color. The simplest and most prevalent type of graffiti, a tag is often done in a color that contrasts sharply with its background. Tag can also be used as a verb meaning “to sign”. Writers often tag on or beside their pieces, following the practice of traditional artists who sign their artwork. … The verb tagging has even become a popular verb today in other types of occasions that are non-graffiti-related. Tagging first appeared in Philadelphia, with spraypainted messages of “Bobby Beck In ’59” on freeways surrounding the city. Since then, individual graffiti scenes have displayed very different forms of tagging that are unique to specific regions. For example, a Los Angeles tag will look much different than a Philadelphia tag, etc. 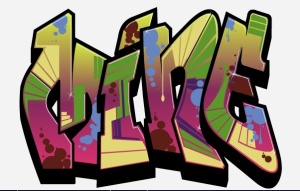 Tagging is a way to put your name on a public space for the price of a can of spray paint and the risk of a fine.  Can tags be thought of as a response to the sale of naming rights? Perhaps not, but perhaps. Thinking of tags in this way, I kind of admire the response: I can appreciate more fully the fluid arcs of spray paint.

But then, what is it about us humans that our impulse is to write our names on everything?  Why this desire to mark a territory, to claim a space with our name? (This question was actually posed to me, disgustedly, by my friend Sabrina.)

I’m not yet sure, but it certainly seems to be happening at every level.

5 thoughts on “Why do we want to write our names all over everything?”